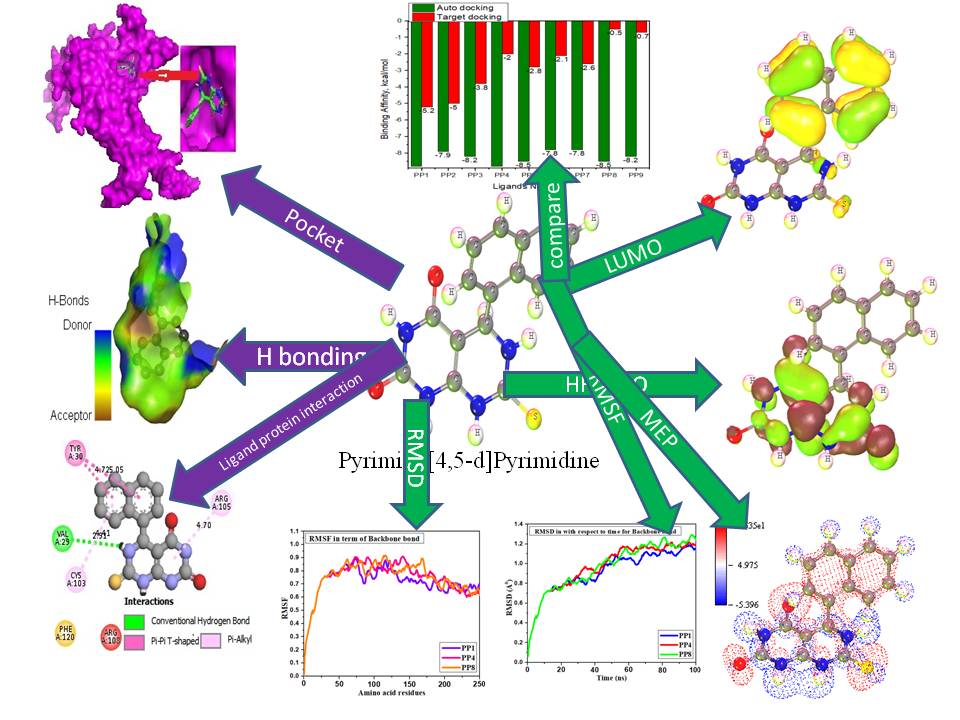 Pyrimido[4,5-d]pyrimidine conveys antimicrobial activity against various micro pathogens having functionalized properties. As a result, this study has designed to illustrate the antibacterial, antifungal, and antiviral properties of pyrimido[4,5-d]pyrimidine. First of all, these structures have been optimized from the characterization of synthesis for calculating chemical descriptors by DFT. Next, the auto docking and target docking against 12 proteins, such as Pseudomonas aeruginosa (2Y0H), Bacillus cereus (1AH7), Escherichia coli (6DR3), Shigella dysenteriae (3FHH) Salmonella typhi (3FHU),  Aspergillus niger (1ACZ), Aspergillus flavus (1XY3), Rhizomucor miehei (4WTP), Candida auris (6U8J), three proteins of SARS-CoV-2 (7T9J, 7T9L, and 7TB4) were performed for the determination of binding sites and binding affinity. One FDA approved drug (Ampicillin) has docked against 12 proteins while the Bacillus cereus (Bacteria), Aspergillus flavus (Fungus), and SARS-CoV-2, 7T9L (Omicron) are obtained the best binding affinity after docking. The most common residues are the PHE-66, ARG-176 and VAL-124 for Bacillus cereus, Aspergillus flavus and SARS-CoV-2, Omicron (7T9L), respectively, as they blocked the active sites by the ligands as inhibitors. It is revealed that this study contained both auto docking and target docking whereas the binding affinity of auto docking is that the binding affinity for auto docking is higher than target docking. Finally, among the nine compounds, three compounds show outstanding results against bacteria, fungus and virus. At last, molecular dynamics were performed to check the stability and validation of the docked complex and quantum calculations obtained the molecular properties, as well as ADMET, pharmacokinetics, Lipinski Rule and QSAR data.