Design, synthesis and antimicrobial screening of some new thienopyrimidines 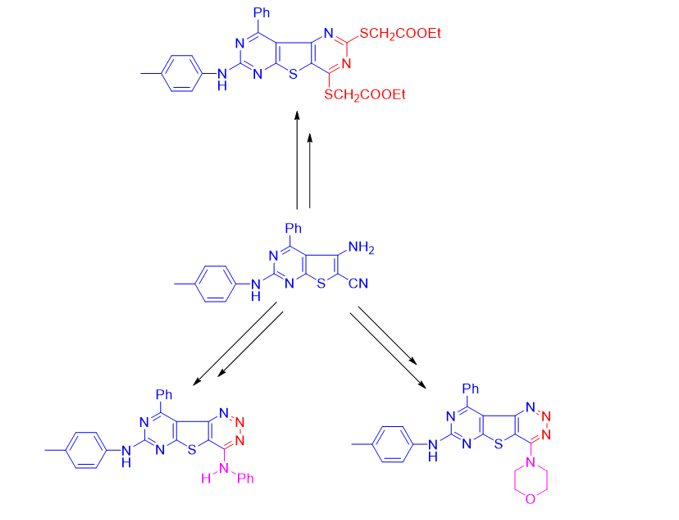 Heterocyclic compounds play an important role in our life due to their biological importance in the struggle of microorganisms. Herein, a series of novel hybrid compounds of thienopyrimidine with triazine and pyrimidine scaffolds were synthesized starting from difunctionalized compound 5-amino-4-phenyl-2-(p-tolylamino)thieno[2,3-d]pyrimidine-6-carbonitrile (1). Moreover, the diazotization of compound 1 with sodium nitrite in an acidic medium gave the chloro-triazine compound 2 which was subjected to the nucleophilic substitution of chlorine atom with different nucleophiles delivered compounds 3a-5c. Furthermore, the reaction of compound 1 with carbon disulfide led to the formation of dithione derivative 6 which was alkylated with ethyl chloroacetate to give compound 7, on the other hand, the reaction of compound 1 with phenyl isothiocyanate produced 4-imino-3,9-diphenyl-7-(p-tolylamino)-3,4-dihydropyrimido[4',5':4,5]thieno [2,3-d]pyrimidine-2(1H)-thione (8), while acylation of the amino group in compound 1 with acetic anhydride gave compound 9. All synthesized compounds were characterized by elemental and spectral analysis techniques (IR, 1H NMR, 13C NMR, Mass spectroscopy). Furthermore, the synthesized compounds were tested for their antimicrobial activity against different strains of bacteria and fungi, and the results obtained showed good to moderate activity with almost all the strains.